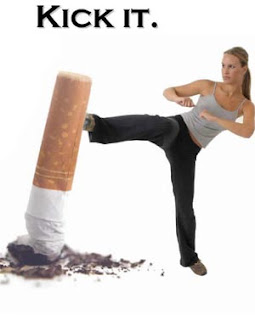 Image courtesy of Google Images.
Was it Malcolm X that thought quitting cigarettes was more difficult that kicking a cocaine habit cold turkey? Surely tobacco, smoked in little chemical riddled white tubes, is one of the most addictive substances known to humanity. Why else would anyone deliberately inhale known carcinogens and other substances that slowly destroy virtually every organ system? Yet, as addictive as smoking is, I say it has nothing on religion. God is the most difficult habit of all to kick. [I must give credit where due for my title. When I was in high school, a teacher who had once been a member of an order of monks, gave a lecture entitled: “Kicking the Habit,” describing both the process of walking around a cloister with his feet brushing his habit with each step and the process of giving it all up. I’ve always thought was a great play on words and worth repeating here.]
Why is God so hard to give up? In my experience in relating to the religious, and Christians in particular, even in the face of overwhelming evidence to the contrary, people are very, very reluctant to give up God. Belief in God seems to linger much more stubbornly when faced with educated, rational thought on the topic than any other belief (well, with the exception, perhaps, of creationism). Anyone who has gone through university and taken some science courses has had to set aside preconceived notions about the nature of the world we live in and accept certain truths that are supported by evidence. Usually, this is an exciting and interesting process of discovery. But it seems that the process of “discovery” in terms of religion simply hardens hearts and minds towards reality and instead strengthens resolve to believe. Cherry-picking evidence to support the notion of the existence of God is rampant and indeed necessary to anyone who is going to continue to believe in God after a thorough scientific education. That anyone, for example, could still in this day and age believe that the earth appeared out of nowhere within the past 10,000 years with all the current species already in existence in their current form is preposterous. It is also extremely stubborn. But even leaving aside the fundamentalists who cling to the creation story, any believer in God has to set aside all sorts of rational thought about the effectiveness of prayer, the origins of our own species, the problem of evil, and so on.
Why? Why is it such a difficult habit to kick? I hypothesize that there are two main reasons. The first is essentially fear of death and the second is unwillingness or inability to accept that one’s whole life has been a fairly tale. Fear of death is a big one. Pascal’s Wager is alive and well in the 21st Century, and I often come across former Christians who know they are now atheists, who know with all reason that there is no God, and yet who still occasionally have momentary panic at the terrible thought of going to hell if they turn out to be wrong. Hell is one hell of a motivation. Without the concept of an afterlife, Christianity would likely either never have gotten off the ground, or would have remained a small Pauline sect of Judaism. On occasion I’ve asked the odd Christian whether they would honestly still be a Christian if they knew for certain there was no afterlife. Without fail they all immediately say yes, which is not surprising. When you’ve got Big Brother watching over your shoulder 24-7, you can’t afford to let him suspect that you’re only in it for the goodies. But deep inside, would they? Why would anyone live their life as a Christian if there was no afterlife whatsoever? It makes no sense at all.
The fear of accepting that one’s whole life has been a fairy tale is also a strong motivation for staying true to the church. Any atheist who was once a Christian has gone through the process of this realization, and it is a difficult process. Often it is quite sudden, but it is not easy to realize that the person you’ve been talking to every night in bed, the person you’ve been leaning on for comfort, the omnipotent being that has been helping you make decisions about career, marriage, and every other aspect of your life, simply doesn’t exist. Why, you’ve been talking to yourself all these years! There was no one there! That is a very difficult concept for anyone to embrace, no matter how much the evidence supports it.
Posted by Canadian Atheist at 7:10 PM

Email ThisBlogThis!Share to TwitterShare to FacebookShare to Pinterest
Labels: Religion