Got the Silly Thing in Reverse 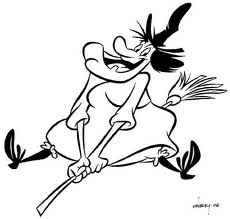 Image courtesy of Google Images.
In follow up to my recent post about responding to “evidence for God” raised by a Christian, and in particular the issue of life existing despite what seems like overwhelmingly small odds, I came across an analogy that I think fits quite well. It shows how the religious tend to go about things backwards when trying to examine evidence to make it fit their point of view.
Picture walking out into your yard in winter and finding a small natural hole in the ground. The hole in the ground has some natural features to it such as branches and bumps. That day it rains and then freezes and then you go back outside and now notice that there is a piece of ice fitted perfectly into the hole in the ground. You pull the little piece of ice out of the ground and notice that it perfectly matches the hole’s shape. There are little bumps wherever there were little holes, and there are little dimples in the ice wherever there were little bumps in the ground. No one would seriously be tempted to think that some higher intelligence must have place that piece of ice there by design because we all understand the relatively simple science of how water flows to fill a hole and then freezes to the shape of the mold. Yet, for some reason, when life is observed, the immediate reaction by some is to assume that it was placed there by the design of some higher intelligence (i.e. God), because they do not understand the science of evolution and life formation. The hole in the ground was there. Given that it rained and then froze, and given the nature of water, there is no other possibility but that ice will form in the shape of the hole in the ground. By analogy, the earth exists with the conditions of temperature and chemical composition that it has. Given the nature of biological life, there is no other possibility but that life will form in the way it has. (Of course, there are lots of possibilities of how life might have ended up, but that it formed at all is the given in this example). The whole point of view of the religious is in reverse. Yet again, they form the conclusion and then find evidence to support it.
[I owe whoever authored this analogy the credit for coming up with it. To date I have not found the source, but will update it when I do so].
Another more philosophical example is one I came across in written conversation with a Christian. After voicing what I considered a reasonable point of view about an issue, I was told by this person that it was ironic that I (as an atheist) was the one that had the “Christian” point of view on the issue while the Christians he had engaged with did not. Again, the whole point of view is in reverse. His assumption that a point of view of tolerance, love, and rational thought is a Christian one, and that therefore it was ironic that an atheist held that position, is in backwards. The position assumes that all goodness originates from Christianity and God and therefore it is impossible for an atheist to be “good” without having adopted some of the Christian message. Pure bunk. I’ll expand on this example with a few more details for interest sake.
The conversation in question involved an questioning by the Christian in question (whom I think is a very open-minded, liberal thinking, almost non-Christian) about the response to the assassination of Osama bin Laden by American troops. He was basically questioning the celebrating people were doing over someone else’s death, even if that someone else was an evil person. (This is a very simplified summary of his position, but adequate for my purposes here).
I responded by writing: “Finding a reason to justify killing other humans is easy, but never right, and either "side" can always claim outrage at the actions of the other in their justification. The only logical position I can take is that killing humans is wrong under any circumstances.”
A number of Christians then responded as well and some of their responses were downright crazy (or as another ex-Christian has called it, funny-mentalist). Although it is lengthy, one such response should be included in full here:
“I think that as a Christian who accepts the Bible as the being the word of God..the actual inspired preachings/teachings/words​ of God, I cant help but come to some different conclusions than many of you.

I think that God's justice is a combination of his love and his wrath. We can not read parts of the Bible..the love parts, and ignore the anger of the Lord.(in case you think its only the old testament that talks about his Wrath its mentioned 10 times just in James, including James 1:18 "The wrath of God is being revealed from heaven against all the godlessness and wickedness of people, who suppress the truth by their wickedness").

Paul says this wrath of God “is revealed.” The Greek word is apokaluptetai, a present passive indicative. It denotes a continuous revelation of the wrath of God. Just as the righteousness of God is continually revealed in the preaching of the gospel, the wrath of God is also being revealed continuously. These are two parallel yet antithetical revelations. [Reverend P. G. Mathew, M.A., M.Div., Th.M.]

The Bible tells us to Fear the Lord...not just snuggle in for some love. We should fear the justice of God because if we lose touch with the fact that we also deserve His justice then we are in a heap of trouble.

When a man makes it his life's mission to attack a people group that God claimed as his own (Israel) and those who stand beside them (to this point the US..who knows for how much longer)...then it is ok to rejoice when God chooses to reveal His power over the wicked. I dont think we take this event and rejoice that a man had been cast into an eternal fire of damnation, but we can rejoice that the reign of tyranny, oppression and murder has come to an end.

Osama Bin Laden was a gifted and powerful speaker (much like Hitler) who was VERY influencial in a continual pattern of leading people into a life of Direct Contradiction to the teachings of Jesus Christ. Many young lives were lost because of his teachings and I for one rejoice that he is no longer able to influence young men with his poison to hate, kill and make choices that condemn themselves to the fires of hell.
(for the record im not saying that [name of original commenter] was saying that Osama should have been left alone, in love. I am saying that although i DO NOT think chanting in the streets and having weekend parties is the right way to take this news....i rejoice in the fact that God has shown his Justice [and i do believe that God can chose to use the US Navy Seals as the tip of his sword] It reminds me of how valuable his mercy is to me personally!”
[Bolding is my addition. I thought the bolded section needed highlighting for its intense…craziness. No other word will suffice.]
In response, then, I wrote:
“Against my better judgment, I feel the need to comment again. Wow. If I needed any illustration of my point about how easy it is to find a justification for killing people (or celebrating the death of people), I think I got it. It is just as easy (and illogical) to find a justification for hating George Bush for killing tens of thousands of people as it is to find a justification for hating bin Laden for killing thousands. It all depends on which doctrine of hate you happened to be raised on.”
Now for the irony…my Christian acquaintance wrote, in response to me:
“It is a little weird/ironic, don't you think, that YOU are the one arguing vehemently for what (I believe) is the actual response that Christ would argue for? Perhaps there are no Christians, except atheists :) (Or agnostics - not really sure where you'd place yourself and I certainly wouldn't want to place anyone else).”
An astounding statement. It is ironic that I, as an atheist, are making the argument that Christ would make. Got the silly thing in reverse! Whether “Christ” would make such an argument or not, I have no idea nor interest. What I do know from observation is that not many Christians would make such an argument while I think many atheists would. The presumption that anything that anyone says that is leaning towards peace and forgiveness (not that I have any forgiveness for Osama bin Laden, please understand), and rational thought about the conflicts in the world we live in, must stem from God. Are you joking??? The same god that was so blood-thirsty and condoning of genocides in the Bible? The same god that is willing to send people off to an eternity of hate, suffering, and pain because of the culture they happened to be brought up in? No, my statements are utterly rational and in line with my atheistic beliefs. There is nothing Christian about what I said. The Christian message in this case is much nearer that of Anne Coulter, a certifiable funny mentalist:
“We should invade their countries, kill their leaders and convert them to Christianity.”
Please, put the silly thing in forward gear and start thinking for yourself.
Posted by Canadian Atheist at 7:46 AM