I must be the worst blogger in the history of the internet. I realize this is my first post in eight months. However, since no one is really reading my blog, I suppose it doesn't matter. Vicious cycle.

Canada faces a federal election this October (or sooner). Through a recent change in the election process, there is a fixed date for federal elections. In the past, of course, the election was called by the sitting government at a date more or less of their choosing, and it had to fall within the mandate period following the previous election. With the new system, the federal government can still call an early election if they think it is to their advantage (or technically they would be forced to if there was a vote of non-confidence in the House of Commons - though that is virtually impossible in a majority government situation). So, this year's federal election will be held on October 15th.

The Conservative Party of Canada earned their first majority government in 2011. This happened despite their earning only 39.6% of the votes. This 39% earned them 166 seats out of a total of 308, giving them the necessary 155 or greater to form a majority government. I am biased - I am not a conservative voter, despite my conservative fiscal leanings - but I think it is fair to say that a majority of Canadians are not represented by the current government. Roughly 60% of voters did not vote for the party that won, and of course there are many citizens who also did not vote. Many of them (minors, for example) are unable to vote. Such is the nature of parliamentary democracy. Once a party has majority rule, they can pretty much do whatever they want. Issues still need to be debated and voted on in the House of Commons, but since a bill passes with a majority vote, so long as the ruling party whips the vote they can ensure the passage of whatever bill or budget they want. For the term of their mandate, it is in many ways a dictatorship.

Any party that wins might govern this way, and in the 1990s the Liberal Party governed much the same way. They formed government with less than 50% of the votes, and with their majority in the House of Commons they pretty much did as they pleased.

The big difference with the current government is that the majority of voters (about 60%) all vote for parties that have much in common. The Liberal Party, the New Democratic Party (NDP), and the Green Party, moving more and more left of centre respectively, have much in common when compared to the Conservatives. Therefore the 60% who did not vote Conservative are probably more likely to be consistently disappointed with the government's decisions than if one of the other parties were in power.

To illustrate this point, I recently took a poll of how I should vote in the coming election. I found a webpage which allows you to fill in a number of responses to issues, and to attach a significance level to each question:

The poll then provides you with a breakdown of how you should vote, and how strongly your views align with each major party. The first time I did the poll, I was told that I was 98% in line with the Liberal Party. The next time I did it (answering much the same as far as I could remember), I was  98% lined up with the Greens: 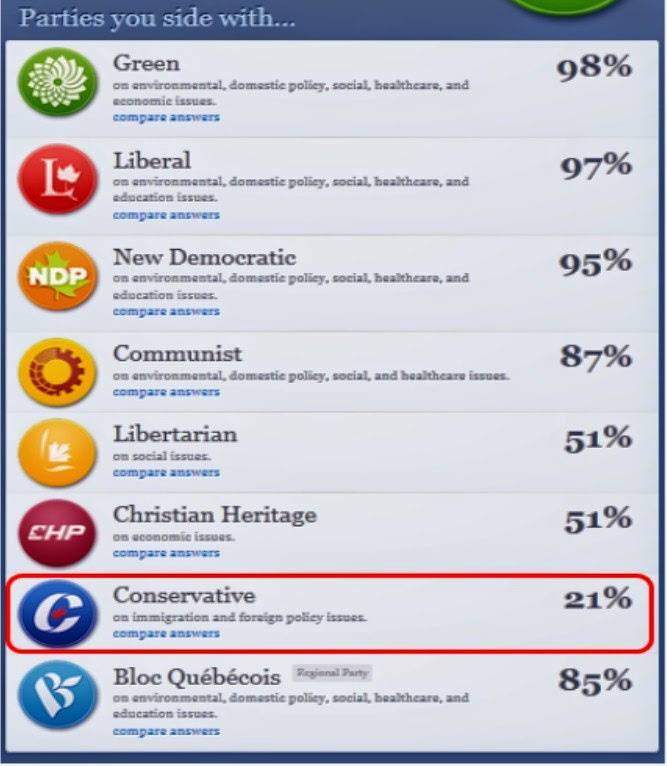 What is interesting about the results, though, is that the Greens, Liberals, and NDP all line up 95% and above with how I feel about various important issues. The Conservatives line up only 21% with my views. There is a major outlier among the major political parties in Canada, and it is the governing party. According to this poll, I should be relatively content to vote Green, Liberal, or NDP. (Indeed I would say that I have yet to decide which of those parties I will vote for, if I decide to vote). The only way the Conservatives will win another majority government is if the 60% of voters who don't vote for them end up splitting their votes between the other parties. If everyone would hold their noses and vote for the Green, Liberal, or NDP candidate most likely to win in the particular riding, then the Conservatives would be reduced to an also-ran. Yes, this might mean that for many Canadians we would not see our first choice of party in power, but it might also mean that the party in power would side with us on 95% of the issues, rather than only 20% of the issues.

There is a movement afoot in Canada called ABC - Anything But Conservative. I can see their logic.


Posted by Canadian Atheist at 9:20 AM