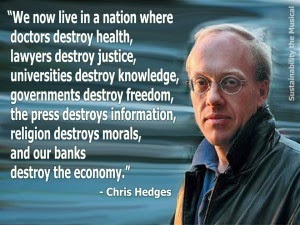 I recently finished the book Empire of Illusion by Chris Hedges. It's a decently written book in which Hedges manages to mix mature writing style without sacrificing accessibility to the average reader. And, at under 200 pages, it's a quick read. The basic premise of the book, as the back cover states, is that "A culture that cannot distinguish between reality and illusion dies." In five sections, the illusions of literacy, love, wisdom, happiness, and the illusion of America itself, Hedges illustrates how spectacle and superficial but catchy sound-bites have essentially taken over from more in-depth reading and understanding of issues. As the population gets less and less literate and chases more and more after entertainment and celebrity-ism, the powerful and wealthy people who control most of the economies of the globe are able to promote their agenda through political processes without much thought of objection by the voters. This initially sounds like some sort of tired and recycled conspiracy theory about how the Illuminati are controlling everything behind the scenes, but it is anything but that. It is a careful examination of how powerful entities, most notably corporations, are exerting their influence in a more and more consolidated manner to achieve their agenda of profit at all costs (no pun intended). Anyone who follows politics at a thoughtful level recognizes that no political party or successful politician is actually serving the people anymore. Politicians, especially in America where it takes enormous amounts of money to get elected, are already sold out to corporate interests before they ever get elected. They are fully owned, and not by the voters who think they put them in office. No decision the politicians make is ever based on what is only best for the population or the society, but always considers the wishes of for-profit corporations whose interests are pushed through by lobbyists. The political aspect of the book is only one component, but perhaps the most important one. Hedges also discusses how television has evolved from a genuine information source to nothing other than entertainment. Particularly in the past 15 years, with the advent of reality television, entertainment has taken over in an especially appealing way for the average citizen. The average person in America has very little in terms of success or meaning in their life (so goes Hedges' thesis), and therefore it is very successful to sell people a story that their life may amount to something. They are a celebrity themselves just waiting to be discovered. This is the appeal of reality television. Rather than watching sports and dreaming about how you could have been that successful athlete, you can now watch reality television shows and watch everyday, flawed people who really are just like you, and think that you might be the next star on TV. This illusion fills a void in one's life and hides the reality that we are not special, and that one day we will all die with most of us never really amounting to anything worthy of remembrance.

I felt that I could really relate to Chris Hedges' thesis in this book. I'm always looking for over-arching themes to society and human behaviour, and I would suggest that Hedges has found one. The replacement of reality with illusion is very, very appealing to humans (as religion has shown over millennia). This overwhelming temptation to accept illusion over reality is entertaining and temporarily satisfying, but of course it leads to a depressing, unfulfilled life. And worse, it leads to a disengaged, disillusioned, apathetic population. Hedges conclusion is that American society is inevitably headed towards a "reverse totalitarianism" based on extreme corporatism, and I am inclined to agree with him. Every citizen in America will one day be monitored in every aspect of their lives by corporations in bed with government.

With the theme of his book in my mind, I watched a short clip this morning of Kevin O'Leary sharing his opinion on the news that the wealthiest 85 people in the world now have as much wealth as the poorest 3.5 billion people in the world. Here is what Mr. O'Leary had to say:

I think anyone who isn't a billionaire (in other words 99.9998% of the world population) understands how inherently ignorant and insulting this statement is. O'Leary's main point is that everyone who isn't extremely wealthy (part of the 1%) is simply not working hard enough. When I was in my 20s and 30s I regularly worked 75 - 80 hours a week. Here I am still not party of the 1% (not even close). I'm sure many readers can relate. As Amanda Lang points out in the video, the poorest people in the world don't even have socks to pull up and get to work and it is ludicrous to suggest that if they only worked harder they too could be the next Bill Gates.

But more importantly than the ignorance that O'Leary spouts is the way in which he does so. As Hedges writes in his book, the media and television are simply entertainment now. Sound bites rule. Celebrity broadcasters or celebrity guests (such as O'Leary) spew out the illusion that the public wants to hear. Despite the fact that most of us are not filthy rich, and despite the fact that we inherently know that working harder is not going to turn us all into billionaires, there is comfort in that illusion. There is comfort in knowing that, hypothetically at least, we too could become wealthy beyond measure. This illusion is maintained by not allowing any proper discussion on the issue. An educated host who was given equal time to discuss the issue would easily pick apart O'Leary's ridiculous assertion. But note what O'Leary has been trained to do: to cut people off and just repeat his sound bite. There is no depth of thought, no attempt to actually understand the opposing point of view. The illusion is spewed out, never given time for analysis, and then the television moves forward before the audience really has time to think about things. Repeat the message every day over and over and people who should see the idiocy of such an illusion start to accept it. Worst of all, whether someone like O'Leary realizes this or not, the main power brokers who want this illusion maintained certainly know the falsehood of the message. However, they want the illusion maintained because their wealth accumulation requires it. The huge lie that working harder will make everyone rich is based on the fact that the super-wealthy need the majority of the population to be kept in poverty in order to facilitate their own enrichment. For example, where is the cheap labour for a corporation going to come from if every Bangladeshi in a sweat shop only worked hard enough to lift themselves up to the status of billionaire?

While I really enjoyed Hedges' book, my main objection is the ending. He spends a couple of pages at the end suggesting that human love eventually overcomes evil in this world. That, even in the death camps of World War II, a bit of love here and there was still noted. I find this to be a feeble sort of roll-over defeatism conclusion to the book. Instead of love, I suggest education. Education is the only solution to preventing (or reversing) the perpetual illusion believed by the majority of the population. Sadly, the powers that be have long ago also recognized that fact and gutted the educational system. The last thing the powerful want is an educated and enlightened population capable of critical thought.

Fortunately, however, while they may control things like funding to formal education, they can't control your decision to turn off your TV and go read a book or engage in some meaningful and respectful discussion with someone about relevant issues.

Posted by Canadian Atheist at 8:47 AM