It's a Miracle! Oh...wait, nevermind.

This post is aimed at moderate, intelligent Christians (or those of other religions that require the supernatural). Many times the popular media, comment boards, and blogs involve discussions with and about those of the religious who are frankly out of touch with reality and a bit extremist. If you think the world is 10,000 years old, then this post is not for you. But, if you are the kind of Christian who accepts science and evolution, and who also believes in Jesus Christ as your personal saviour, then I'd be happy to hear your comments on this post. 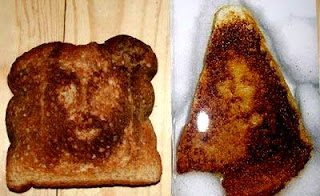 My question is this. Why do you likely reject the "miracles" that some people make in our modern world which are obvious shams. Do you realize that when a grilled cheese sandwich seems to have the image of the Virgin Mary on it, it is just a coincidence of the cooking pattern of the bread combined with our human bias to recognize human faces where they are not actually in existence? If so, then you probably reject the notion that God is speaking through the grilled cheese sandwich as a bit of a silly side of your religion, right? So, if you're still with me so far, then let me ask why you likely don't reject the equally amazing miracles described in an ancient book? Do you believe that the Red Sea physically parted and allowed thousands of Israelites to walk through on dry land? Do you believe that Lazarus rose from the dead to live again? Do you believe that fire came down from heaven and consumed Elijah's offering and the stones that it was built on? Do you believe that Jesus was born of a virgin, died and then came to life again a couple of days later? (Presumably you must believe this latter miracle, since it is part of the basis of the Christian religion). So, why the discrepancy? Why reject the crazy, ridiculous things that people claim today as miracles and yet accept and embrace the stories from the ancients about similarly ridiculous, physically impossible events? Is it only because they are written down in the Bible? Is it because the Bible is the inspired word of God? Wouldn't anyone who wanted to start a religion simply tell you in their book that the book is the inspired word of God and that you should accept it as such?

So, if you are reading this, if you are a Christian, then I would sincerely like to hear your point of view on this matter.
Posted by Canadian Atheist at 10:13 AM