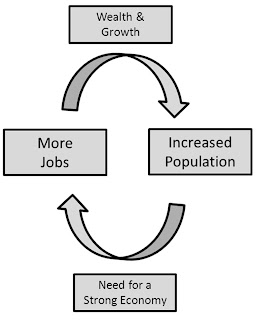 In a previous post I wrote about the myth of government job creation. Today in the news there is a classic example of what I'm talking about:

This story talks about how Shell is to build a liquid natural gas plant in the small northern coastal town (more of a village really) of Kitimat, BC. The project will "create" between 5,000 - 7,000 jobs. Of course, the premier of the province of British Columbia, Christy Clark, rushed to get her name all over this story and to take credit for the Shell corporation's decision to invest in B.C., saying: "We are a stable government with a business-friendly environment, so they’re very interested in British Columbia." Doubtless Clark believes that this is a part of a fantastic plan to increase the number of jobs in B.C., all part of her economic plan to...well, to where exactly?

Yes, an investment like this will bring more jobs to the town of Kitimat. So what? So, more people will move to Kitimat to take up those jobs. It is not as if there are between 5,000 - 7,000 unemployed workers in Kitimat just waiting for a new job (Kitimat's population is around 8,000 people in total). It's also not as if there are 5,000 - 7,000 unemployed people around the province or the country who are just itching to relocate to a very remote coastal village to work on a liquid natural gas plant. And, you can bet that after these 5,000 - 7,000 jobs are "created", the unemployment rate in the province will not change one bit.

So, where do the people come from when a project like this "creates" jobs? They shift from other sectors, they come from overseas, immigrants to Canada have new jobs, and people who move to Kitimat to take up the new jobs marry, have a family and have new kids who grow up and, lo and behold, need a job! Economic growth simply leads to population growth, with roughly the same unemployment following the economic growth. Certainly, during booming economic times such as a few years ago in Alberta, there are very few unemployed people and wages are comparitively high. But, Alberta is a great example of where that leads. What happened when there were so many jobs in Alberta? Wages shot up to entice people to relocate to the jobs. But real estate shot up as well, doubling in price in just a couple of years. Then the whole economic meltdown occured and suddently the natural resources weren't in demand anymore.

You can't have your cake and eat it too. What politician's like Christy Clark don't understand is that economic growth leads to population growth. Then, that larger population demands a larger economy and more jobs to support it. The cycle continues, and more jobs are "created", leading to more population growth and a greater demand for jobs.

The cycle never ends. This is why our current system is not sustainable and is ultimately doomed. We are under the false pretention that we can endlessly grow economically, which we can't. We are also under the pretense that we can endlessly harvest natural resources, which we can't. Natural resources are finite, especially hydrocarbons like oil and natural gas. Eventually they will run out. What will happen then? What will happen when we have developed our economy so much that the population has increased to a level that demands that economy to keep going? Which will crash first, the economy or the population?
Posted by Canadian Atheist at 12:11 PM