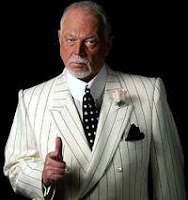 The following is a transcript of Don Cherry, a Canadian ice hockey commentator who has a regular segment called Coach’s Corner during the first intermission of hockey games on the Canadian Broadcasting Corporation’s (CBC) show Hockey Night in Canada. This particular broadcast was made on June 10th, 2011, and was originally transcribed from this link, starting at about the five minute mark.

“Now, I hope we got a little time for this. I’m sitting with you [Ron McLean] watching, you know how I get made fun of: “There’s a code. Oh, that silly code, you know. There’s a code in every sport, and you and I are watching the Red Sox, and I saw Ortiz throw his bat, and I went wild and you kind of looked at me like I was nuts and everything. But watch Ortiz throw the bat. [Video transitions to baseball replay]. This is a big thing in the States right now. This has been going, well you’ll see it the second time [video repeats]. He throws it. This is a big thing in the States right now. In the papers, the U.S. day to day, and Giordaro, what is his name? [Ron McLean interjects] (unintelligible), he just goes nuts on the whole thing and he got up the next time, we’re not going to show it, he got dinged. The next game he got dinged. And he made a little apology, he said: “You know, I,...380 home runs and I throw my bat once.” You DON’T DO IT [yelling]. You don’t, there’s a code that you people don’t know about. Because you saw that and say: “So what? He threw his bat.” It’s the same thing as when I got ripped, what did they say? Entertainment. Watch Ovechkin same thing, he doesn’t do it anymore. I tried to tell you about all this stuff. There’s a code in hockey of how you act, kids, and look at this, he never, ever did this again [video of Alex Ovechkin worshiping his “hot hockey stick”]. Bruce [Boudreau] talked to him and everything. There’s a code in hockey, there’s a code in baseball, and be sure to follow it or you’ll really get it like Ortiz did.”

The first thing that I hope strikes the reader is the appalling grammar and perversion of the English language that comes through even in writing that has been edited for clarity (for example, the term “everythink” to “everything”). Christopher Hitchens has stated that anyone who can really speak properly can write, but then goes on to ask how many people have really speak properly. But, this is besides the point.

The “code” that Mr. Cherry speaks about is a real entity in the sporting world. During the recent Stanley Cup finals in ice hockey, there was an incident in which one player was accused of biting another players gloved finger. The accused player was ostracized as being classless, even though all around him other players were witnessed punching opponents in the face, slashing the back of their opponents’ legs with hockey sticks, and hurling verbal abuse at each other. But, biting is considered outside the code, while all of these other disrespectful actions are considered within the code. There is no rhyme or reason to the code in some sports such as ice hockey. The code simply evolves, much like a religion, over time. Certain actions are considered disrespectful while others, seemingly equally as bad, are not. In ice hockey, for example, yelling obscene insults about an opponent’s wife is perfectly fine. Saying anything racist is not.

The “code” that Mr. Cherry refers to, and demands that kids learn and obey, is really a code of conduct. In his baseball example, a player is ostracized for tossing a bat to the side after hitting a home run (despite the fact the bat was not thrown dangerously, it was merely tossed to one side rather than the other). The reality in that case is that the action was perceived as cocky by the player. This is a laughable offense in the world of professional sports where the participants are applauded for being cocky in most scenarios.

In Mr. Cherry’s world, people should not question. Do not question the code, just respect it. Don’t question why it is unacceptable or disrespectful to throw a bat or to kick an opponent, but it is acceptable (and tough) to punch an opponent in the face or hack him with your hockey stick. Don’t question it, just respect it, or else. (Note the introduction of fear into the equation indicating that there will be dire consequences if you ignore the code).

The similarity between some sports and religion is an interesting topic that probably deserves further attention, but at this point I thought I would introduce the topic with the “code”. What is the equivalent to the code in religion? The law. Don’t work on the Sabbath, but it’s OK to have slaves. Stone your children to death for disobedience, but don’t eat pork. Marry as many women as you can afford, but don’t marry a non-virgin. Don’t wear clothes made of more than one fabric, but do cover your head at all times. And most of all (you can hear Mr. Cherry’s gravelly voice interjecting here)...DON’T DO IT. Be sure to follow the code or you’ll really get it. And whatever you do, don’t question the code.

Haphazard rules with a good dose of fear and you are ready either to establish a major league sport or found a religion.
Posted by Canadian Atheist at 7:01 PM

Email ThisBlogThis!Share to TwitterShare to FacebookShare to Pinterest
Labels: Sports